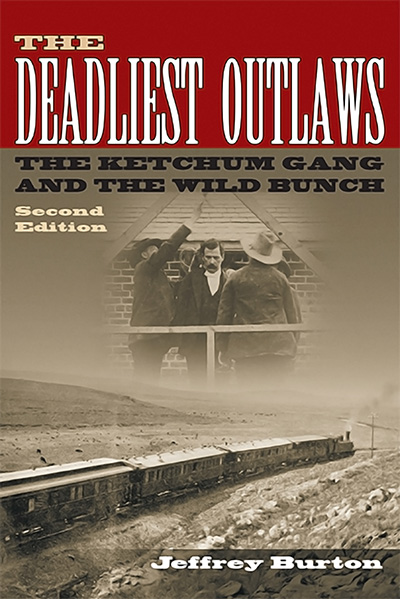 About Burton's The Deadliest Outlaws

After Tom Ketchum had been sentenced to death for attempting to hold up a railway train, his attorneys argued that the penalty was “cruel and unusual” for the offense charged. The appeal failed and he became the first individual—and the last—ever to be executed for a crime of this sort. He was hanged in 1901; in a macabre ending to his life of crime, his head was torn away by the rope as he fell from the gallows.

Tom Ketchum was born in 1863 on a farm near the fringe of the Texas frontier. At the age of nine, he found himself an orphan and was raised by his older brothers. In his mid-twenties he left home for the life of an itinerant trail driver and ranch hand. He returned to Texas, murdered a man, and fled. Soon afterwards, he and his brother Sam killed two men in New Mexico. A year later, he and two other former cowboys robbed a train in Texas. The career of the Ketchum Gang was under way.

In their day, these men were the most daring of their kind, and the most feared. They were accused of crimes that were not theirs, but their proven record is long and lurid. Their downfall was brought about by what one editor called “the magic of the telephone and telegraph,” by quarrels between themselves, and by their reckless defiance of ever-mounting odds.

Jeffrey Burton has been researching the story of the Ketchum Gang and related outlaws for more than forty years. He has mined unpublished sources, family records, personal reminiscences, trial transcripts and other court papers, official correspondence and reports, census returns, and contemporary newspapers to sort fact from fiction and provide the definitive truth about Ketchum and numerous other outlaws, including Will Carver, Ben Kilpatrick, and Butch Cassidy.

The Deadliest Outlaws initially was published in a limited run of 100 paperback copies in England. This second edition in hardcover contains additional material and photographs not found in the earlier printing. It will prove to be the final word on the Ketchum and Wild Bunch gangs.

“This is the best work ever done on the New Mexico outlaws at the turn of the twentieth century.” —Robert K. DeArment, author of Bat Masterson and Alias Frank Canton

“The Deadliest Outlaws is a magnificent piece of in-depth research that clears up much of the murky history and conflicting writing on the lives of the Ketchum gang. The book contains numerous rare and important photographs. The limited first printing of this masterpiece is regrettable. Thanks to this new edition, it will have the wider distribution it deserves.” —Roy B. Young, author of Cochise County Cowboy War

“The Deadliest Outlaws is a monster read on everything you ever wanted to know about the Ketchums. Like all good history books, it makes me want to go visit all of the sites.” —Bob Boze Bell, True West

“The book is a first-rate study of the numerous outlaws associated with the Ketchum and Wild Bunch gangs. Jeff Burton advances this particular field of outlaw history as only a handful of other writers have done.” —Mark Dworkin, WWHA Journal

“Exceptional history… . [M]ay well be the definitive account of one of the West’s most feared gangs.” —New Mexico Magazine

JEFFREY BURTON, an honors graduate of London University, is an independent scholar living in England. He is a vice president of the English Westerners’ Society and the author of Bureaucracy, Blood Money, and Black Jack’s Gang; Indian Territory and the United States, 1866-1906; Constable Dodge and the Pantano Train Robbers; and Western Story.