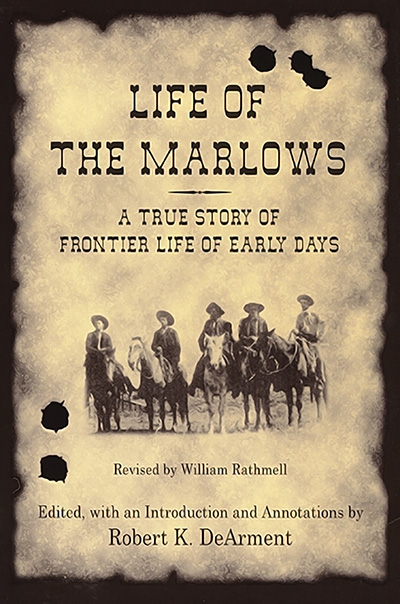 Life of the Marlows: A True Story of Frontier Life of Early Days

About DeArment's Life of the Marlows

The story of the five Marlow brothers and their tribulations in late nineteenth-century Texas is the stuff of Old West legend (and served to inspire the John Wayne movie, The Sons of Katie Elder). Violent, full of intrigue, with characters of amazing heroism and deplorable cowardice, their story was first related by William Rathmell in Life of the Marlows, a little book published in 1892, shortly after the events it described in Young County, Texas.

It told how Boone, the most reckless of the brothers, shot and killed a popular sheriff and escaped, only to be murdered later by bounty hunters. The other four brothers, arrested as accessories and jailed, made a daring break from confinement but were recaptured. Once back in their cells, they were forced to fight off a mob intent on lynching them. Later, shackled together, the Marlows were placed on wagons by officers late at night, bound for another town, but they were ambushed by angry citizens. In the resulting battle two of the brothers were shot and killed, the other two severely wounded, and three mob members died. The surviving brothers eventually were exonerated, but members of the mob that had attacked them were prosecuted in cases that went all the way to the U.S. Supreme Court.

The original 1892 edition and expanded reprint of 1931 are both quite scarce. Later writers drew upon Rathmell’s account when telling the story of the Marlows, but all accounts were slanted sympathetically toward them, given the same bias by Rathmell. Now Robert K. DeArment, a noted historian of outlaws and lawmen of the West, has sifted through the evidence and presents herein an objective, annotated edition of Life of the Marlows, which contains extensive clarifying and corrective footnotes and an index. Now the complete story can be told and readers can judge for themselves: were the Marlows as law-abiding as Rathmell claims? Or was the mob reacting with justified anger?

“I’ve not seen a copy of Life of the Marlows for three decades, and this reading was enormously enhanced by Bob DeArment’s notations. This book will be a significant addition to the literature of frontier violence.” —Bill O’Neal, author of Encyclopedia of Western Gunfighters

“Rathmell’s book is a classic in the prolific genre of books about Old West violence, and yet, despite the accolade of the late Ramon Adams, a great expert on Western Americana, Rathmell’s book has never had such recognition. In addition to his able and informative introduction, DeArment’s copious, valuable notes provide a running scholarly critique of what Rathmell wrote. DeArment is the first Marlow scholar to use a key source that is not one hundred percent in praise of the Marlows, thereby providing a counterweight to the open bias of the Rathmell account.” —Richard M. Brown, author of No Duty to Retreat

“The Marlow brothers never won fame like Jesse James and the Wild Bunch, but their story is a riveting saga of adventure and tragedy unparalleled in the American Wild West. This is raw late 1800s history at its finest and most tragic, a story of hate, death, love, injustice, brutality, vengeance, and triumph. And it is all brought together and written by a master historian and storyteller, Robert K. DeArment.” —Leon Metz, author of Pat Garrett and John Wesley Hardin

“Replete throughout are DeArment’s extensive corrective or clarifying annotated notes, which help further broaden the scope of this soundly researched material.” —Review of Texas Books

ROBERT K. DeARMENT is a longtime member of the Western Writers of America and the Wild West History Association (formerly NOLA and WOLA). He is the author of numerous books, including Bat Masterson, George Scarborough, and Alias Frank Canton. He lives in Sylvania, Ohio.

Life of the Marlows: A True Story of Frontier Life of Early Days