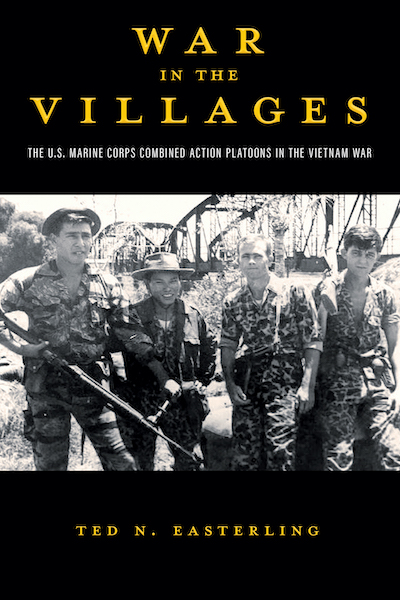 War in the Villages: The U.S. Marine Corps Combined Action Platoons in the Vietnam War

About Easterling's War in the Villages

Listen to Ted N. Easterling’s interview discussing War in the Villages on the Military History Inside Out podcast hosted by Cris Alvarez.

Much of the history written about the Vietnam War overlooks the U.S. Marine Corps Combined Action Platoons. These CAPs lived in the Vietnamese villages, with the difficult and dangerous mission of defending the villages from both the National Liberation Front guerrillas and the soldiers of the North Vietnamese Army. The CAPs also worked to improve living conditions by helping the people with projects, such as building schools, bridges, and irrigation systems for their fields.

In War in the Villages, Ted Easterling examines how well the CAPs performed as a counterinsurgency method, how the Marines adjusted to life in the Vietnamese villages, and how they worked to accomplish their mission. The CAPs generally performed their counterinsurgency role well, but they were hampered by factors beyond their control. Most important was the conflict between the Army and the Marine Corps over an appropriate strategy for the Vietnam War, along with weakness of the government of the Republic of South Vietnam and the strategic and the tactical ability of the North Vietnamese Army.

War in the Villages helps to explain how and why this potential was realized and squandered. Marines who served in the CAPs served honorably in difficult circumstances. Most of these Marines believed they were helping the people of South Vietnam, and they served superbly. The failure to end the war more favorably was no fault of theirs.

TED EASTERLING served as a U.S. Marine in the Vietnam War. He received his Ph.D. in history from the University of Akron, where he taught history. He lives in Munroe Falls, Ohio, with his wife Mary.

War in the Villages: The U.S. Marine Corps Combined Action Platoons in the Vietnam War