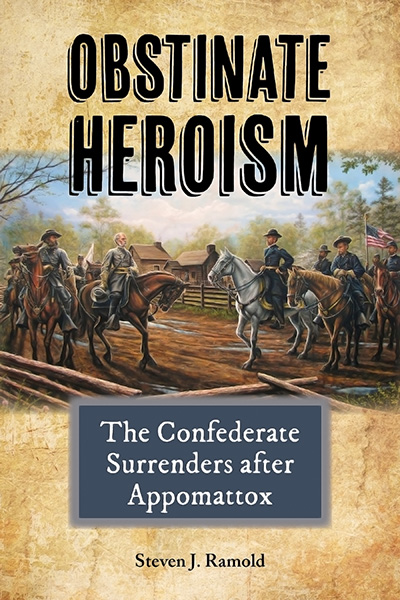 Despite popular belief, the Civil War did not end when Robert E. Lee surrendered to Ulysses S. Grant at Appomattox, Virginia, in April 1865. The Confederacy still had tens of thousands of soldiers under arms, in three main field armies and countless smaller commands scattered throughout the South. Although pressed by Union forces at varying degrees, all of the remaining Confederate armies were capable of continuing the war if they chose to do so. But they did not, even when their political leaders ordered them to continue the fight. Convinced that most civilians no longer wanted to continue the war, the senior Confederate military leadership, over the course of several weeks, surrendered their armies under different circumstances.

Gen. Joseph Johnston surrendered his army in North Carolina only after contentious negotiations with Gen. William Tecumseh Sherman. Gen. Richard Taylor ended the fighting in Alabama in the face of two massive Union incursions into the state rather than try to consolidate with other Confederate armies. Personal rivalry also played a part in his practical considerations to surrender. Gen. Edmund Kirby Smith had the decision to surrender taken out of his hands—disastrous economic conditions in his Trans-Mississippi Department had eroded morale to such an extent that his soldiers demobilized themselves, leaving Kirby Smith a general without an army. The end of the Confederacy was a messy and complicated affair, a far cry from the tidy closure associated with the events at Appomattox.

“The important disconnect between the political leadership (Davis, etc.) and the military in the field at the end of the war across theaters is well-explored.” —–Barton A. Myers, author of Rebels against the Confederacy: North Carolina’s Unionists

STEVEN RAMOLD is Professor of American History at Eastern Michigan University. He is the author of three previous books on the Civil War: Slaves, Sailors, Citizens: African Americans in the Union Navy; Baring the Iron Hand: Discipline in the Union Army; and Across the Divide: Union Soldiers View the Northern Home Front. He and his family reside in Ypsilanti, Michigan.