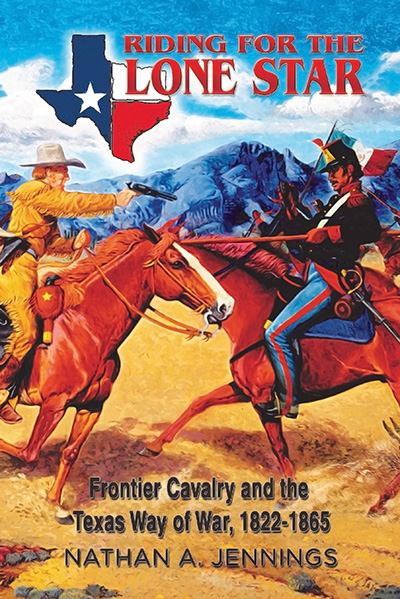 About Jennings's Riding for the Lone Star

The idea of Texas was forged in the crucible of frontier warfare between 1822 and 1865, when Anglo-Americans adapted to mounted combat north of the Rio Grande. This cavalry-centric arena, which had long been the domain of Plains Indians and the Spanish Empire, compelled an adaptive martial tradition that shaped early Lone Star society. Beginning with initial tactical innovation in Spanish Tejas and culminating with massive mobilization for the Civil War, Texas society developed a distinctive way of war defined by armed horsemanship, volunteer militancy, and short-term mobilization as it grappled with both tribal and international opponents.

Drawing upon military reports, participants’ memoirs, and government documents, cavalry officer Nathan A. Jennings analyzes the evolution of Texan militarism from tribal clashes of colonial Tejas, territorial wars of the Texas Republic, the Mexican-American War, border conflicts of antebellum Texas, and the cataclysmic Civil War. In each conflict Texan volunteers answered the call to arms with marked enthusiasm for mounted combat. Riding for the Lone Star explores this societal passion—with emphasis on the historic rise of the Texas Rangers—through unflinching examination of territorial competition with Comanches, Mexicans, and Unionists. Even as statesmen Stephen F. Austin and Sam Houston emerged as influential strategic leaders, captains like Edward Burleson, John Coffee Hays, and John Salmon Ford attained fame for tactical success.

“Jennings makes a strong argument for Texas having its own ‘Way of War.’ Readers will find a new perspective to view Texas and military matters.” —Joseph G. Dawson III, editor of The Texas Military Experience and author of Doniphan’s Epic March

NATHAN A. JENNINGS is a U.S. Army officer and frontier historian. He earned his master’s degree at the University of Texas at Austin and taught history at the U.S. Military Academy. Jennings commanded armored forces in Baghdad and Kirkuk during Operation Iraqi Freedom.

More from Nathan A. Jennings