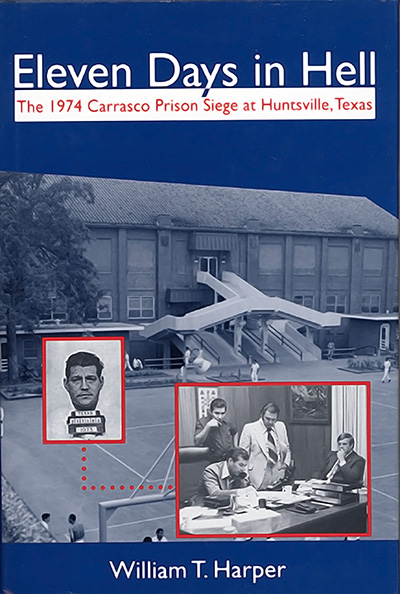 About Harper's Eleven Days in Hell

From one o’clock on the afternoon of July 24, 1974, until shortly before ten o’clock the night of August 3, eleven days later, one of the longest hostage-taking sieges in the history of the United States took place in Texas’ Huntsville State Prison. The ringleader, Federico (Fred) Gomez Carrasco, the former boss of the largest drug-running operation in south Texas, was serving life for assault with intent to commit murder on a police officer. Using his connections to smuggle guns and ammunition into the prison, and employing the aid of two other inmates, he took eleven prison workers and four inmates hostage in the prison library. Demanding bulletproof helmets and vests, he planned to use the hostages as shields for his escape.

Negotiations began immediately with prison warden H. H. Husbands and W. J. Estelle, Jr., Director of the Texas Department of Corrections. The Texas Rangers, the Department of Public Safety, and the FBI arrived to assist as the media descended on Huntsville. When one of the hostages suggested a moving structure of chalkboards padded with law books to absorb bullets, Carrasco agreed to the plan. The captors entered their escape pod with four hostages and secured eight others to the moving barricade. While the target was en route to an armored car, Estelle had his team blast it with fire hoses. In a violent end to the standoff, Carrasco committed suicide, one of his two accomplices was killed (the other later executed), and two hostages were killed by their captors.

“A unique story in American correctional history.” —Ben M. Crouch, author of An Appeal to Justice

“None of us who were there for those eleven incredible days will ever forget the tension, the heat, the frustration, and the courage of so many good people, inside and outside that prison. It is a tragedy that two hostages died. It is a miracle all the rest lived.” —Cal Thomas, Fox News

“This author has done a fantastic job in capturing this story. His portrayals of the individuals involved in all aspects of the story are extremely accurate. Although I knew what the ultimate outcome of the story would be, I still turned every page most eagerly.” —Robert E. Wiatt, Director, Texas A&M University Police Dept., and former FBI agent at the siege

“Harper has done a superb job of reporting in this book. He gives us the inside story which none of the reporters actually covering the siege—including me—ever knew.” —Jim Barlow, Houston Chronicle

”[Harper] has assembled the best account written of the 11-day hostage siege… His riveting narrative leaves the reader with a ‘you-were-there’ feeling that brings goose bump-producing memories from those of us who were there.” —Alan L. Bailey, San Antonio Express-News

”[T]his book is the definitive work regarding one of the most dramatic and intense prison standoffs in United States history and should be in every library and museum that addresses this genre.” —Patrick McConal, East Texas Historical Journal

WILLIAM T. HARPER spent fourteen years with the Philadelphia Inquirer as reporter, writer, and editor. He has written numerous articles for American Heritage and Focus. For this story he utilized eighty-eight real-time audio tapes of negotiations and interviewed many of the surviving participants. He lives in Bryan, Texas.