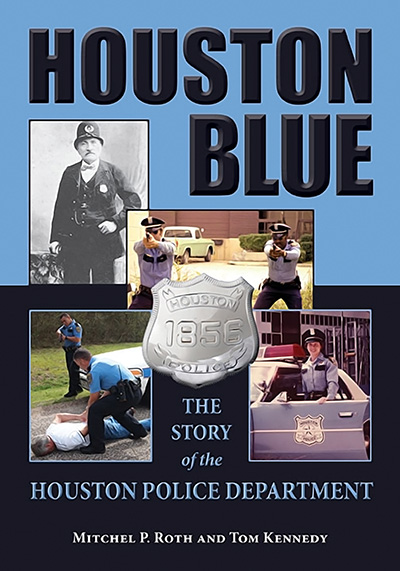 Houston Blue: The Story of the Houston Police Department

About Roth and Kennedy's Houston Blue

Houston Blue offers the first comprehensive history of one of the nation’s largest police forces, the Houston Police Department. Through extensive archival research and more than one hundred interviews with prominent Houston police figures, politicians, news reporters, attorneys, and others, authors Mitchel P. Roth and Tom Kennedy chronicle the development of policing in the Bayou City from its days as a grimy trading post in the 1830s to its current status as the nation’s fourth largest city. Combining the skills of historian, criminologist, and journalist, Roth and Kennedy reconstruct the history of a police force that has been both innovative and controversial.

Readers will be introduced to a colorful and unforgettable cast of police chiefs and officers who have made their mark on the department. Prominent historical figures who have brushed shoulders with Houston’s Finest over the past 175 years are also featured, including Houdini, Teddy Roosevelt and his Rough Riders, O. Henry, former Texas Ranger Frank Hamer, hatchet wielding temperance leader Carrie Nation, the Hilton Siamese Twins, blues musician Leadbelly, oilman Silver Dollar Jim West, and many others.

The Houston Police Department has been at the cutting edge of police innovation. It was one of the first departments in the South to adopt fingerprinting as an identification system and use the polygraph test, and under the leadership of its first African American police chief, Lee Brown, put the theory of neighborhood oriented policing into practice in the 1980s. The force has been embroiled in controversy and high profile criminal cases as well. Among the cases chronicled in the book are the Dean Corll, Dr. John Hill, and Sanford Radinsky murders; controversial cases involving the department’s crime lab; the killings of Randy Webster and Joe Campos Torres; and the Camp Logan, Texas Southern University, and Moody Park Riots.

Roth and Kennedy reveal that most of modern Houston’s issues and problems are rooted in many of the challenges that faced police officers in the nineteenth century. Anyone who drives in Houston will not be surprised that the city’s reputation for poor drivers was already cemented in the 1860s, when ordinances were passed to protect pedestrians from horse-drawn carriages. Likewise, the department’s efforts to overcome funding and manpower shortages, and political patronage, are a continuing battle that began a century ago. In the end it is a story about the men and women in blue and the role played by the Houston Police Officers Union in creating a modern 21st-century police force from its frontier roots.

“The authors do an exceptional job piecing the history together. The vivid descriptions of life in early Houston, as well as the elaborate details concerning the evolution of policing in the country’s fourth largest city, make this a highly engaging read.” —Daniel M. Stewart, criminal justice, University of North Texas

“Houston Blue leaves the reader with a true sense of history and pride for the many Houston Police officers—the men and women in blue—who gave so much of themselves and their families to serve the citizens of Houston for the past 175 years. It is a must read for anyone with a fondness of history and policing, for the art of storytelling and the early days of good guys and bad guys, and for the surprising appearance of John Wayne in the annals of the Houston Police Department.” —Michael Bozeman, criminal justice, University of Texas-Tyler

MITCHEL P. ROTH received the Ph.D. in history from the University of California, Santa Barbara, in 1993 and is currently professor of criminal justice at Sam Houston State University in Huntsville, Texas. He has written extensively about the history of crime and punishment and was selected by the Texas Department of Public Safety to write its history and update it three times over the past fifteen years. His books include The Encyclopedia of War Journalism, Convict Cowboys: The Untold History of the Texas Prison Rodeo, Crime and Punishment: A History of the Criminal Justice System, Historical Dictionary of Law Enforcement, Houston Blue: The Story of the Houston Police Department, and Man with the Killer Smile: The Life and Crimes of a Serial Mass Murderer.

TOM KENNEDY spent twenty-five years with the late Houston Post as a columnist and member of the Editorial Board. His columns focused on politics, police, and criminal justice. He authored From Waco to Wall Street, the biography of SYSCO founder John Baugh. A Baylor University journalism graduate, he resides in Houston with his wife Glenda.

Houston Blue: The Story of the Houston Police Department