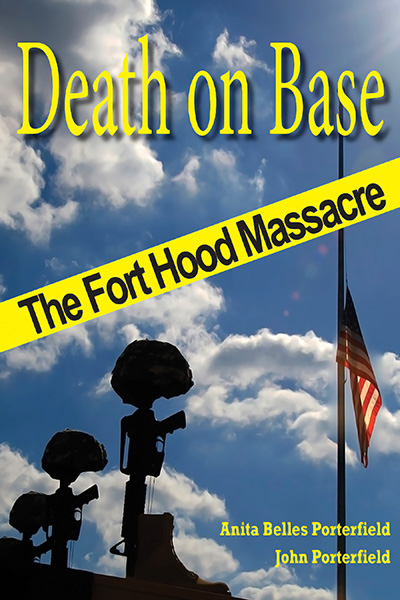 Death on Base: The Fort Hood Massacre

When Army psychiatrist Nidal Hasan walked into the Fort Hood Soldier Readiness Processing Center and opened fire on soldiers within, he perpetrated the worst mass shooting on a United States military base in our country’s history. Death on Base is an in-depth look at the events surrounding the tragic mass murder that took place on November 5, 2009, and an investigation into the causes and influences that factored into the attack.

The story begins with Hasan’s early life in Virginia, continues with his time at Fort Hood, Texas, covers the events of the shooting, and concludes with his trial. The authors analyze Hasan’s connections to radical Muslim cleric Anwar al-Awlaki and Al Qaeda in the Arabian Peninsula (AQAP) and demonstrate how radical Islam fueled Hasan’s hatred of both the American military and the soldiers he treated.

Hasan’s mass shooting is compared with others, such as George Hennard’s shooting rampage at Luby’s in Killeen in 1991, Charles Whitman at the University of Texas, and Virginia Tech shooter Seung-Hui Cho. The authors explore the strange paradox that the shooting at Fort Hood was classified as workplace violence rather than a terrorist act. This classification has major implications for the victims of the shooting who have been denied health benefits and compensation.

“This is a story that is expertly told and is useful as a reference into this ghastly event. It should be looked upon as a reliable case study presenting facts for researchers to consider in their investigations into the phenomena of terrorism, workplace violence, and mass murder.” —Gary M. Lavergne, author of A Sniper in the Tower

“The Porterfields are first-rate reporters with an eye for the telling detail. In Death on Base, they grippingly deconstruct this national tragedy in all its brutality while probing the psychology of one of the most disturbing mass murderers in modern times.” —Hampton Sides, bestselling author Ghost Soldiers and In the Kingdom of Ice

“Thoroughly investigated by top-notch authors, Death on Base is a shocking story of mass murder that will chill to the bone.” —Ann Rule, America’s foremost writer of true crime

“Death on Base fills a gap in the research literature on violence, terrorism, mass murder, military justice, and so-called workplace violence. It is a significant contribution to the literature.” —James Marquart, co-author of The Rope, The Chair, and the Needle: Capital Punishment in Texas, 1923-1990

“The very best reason to study history is to learn from it. That’s what makes Death on Base: The Fort Hood Massacre so important. In this meticulous and gripping retelling, you’ll see the highs and lows of our security, our response, and our recovery. You’ll also see our enemies like never before. Only by studying all of it can we hope to avoid repeating this tragedy.” —Brad Meltzer, author of The Fifth Assassin

“The authors are superb at humanizing the victims of Fort Hood in this meticulous and occasionally harrowing journey through American mass murder, terrorism, and politics.” —Ron Franscell, author of The Darkest Night and Delivered from Evil

“For the first time, journalists take us past the superficial headlines of Nov. 5, 2009, and deliver a horrifying, yet gripping narrative of that fated day at Fort Hood, Texas, when 13 American servicemen and women were murdered and 43 others were left wounded by Dr. Nidal Hasan, a Palestinian-American and U.S. Army psychiatrist turned violent jihadist. Hasan’s prior signals of extremism should have led federal authorities to act before the worst incident of domestic terrorism on U.S. soil since Sept. 11, 2001, but they didn’t. Death on Base is a real page turner, but it’s also a cautionary warning that dangerous extremists continue to slip through the nation’s security net.” —Robert Rivard, director of the Rivard Report and author of Trail of Feathers: Searching for Philip True

ANITA BELLES PORTERFIELD is a seasoned journalist who also served as the Director of Emergency Medical Services for the state of Louisiana, which provided her with a technical perspective in critiquing the response to the Fort Hood shooting. JOHN PORTERFIELD has a B.A. in journalism from the Manship School of Mass Communications at Louisiana State University. They both live in Boerne, Texas.

ANITA BELLES PORTERFIELD is a seasoned journalist who also served as the Director of Emergency Medical Services for the state of Louisiana, which provided her with a technical perspective in critiquing the response to the Fort Hood shooting. JOHN PORTERFIELD has a B.A. in journalism from the Manship School of Mass Communications at Louisiana State University. They both live in Boerne, Texas.

Death on Base: The Fort Hood Massacre