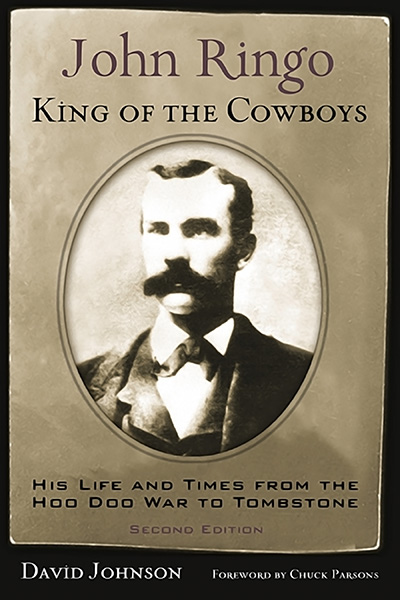 About Johnson's John Ringo, King of the Cowboys

Western gunman John Ringo is most well-known for his role in Tombstone for backing the Cowboys against the Earps. In his youth he became embroiled in the blood feud turbulence of post-Reconstruction Texas and the Mason County “Hoo Doo” War, then shot it out with Victorio’s raiders during a deadly confrontation in New Mexico before going to Tombstone in territorial Arizona. There Ringo championed the largely Democratic ranchers against the Earp brothers and Doc Holliday, finally being part of the posse that hounded these fugitives from Arizona. In the end, Ringo died mysteriously in the Arizona desert, his death welcomed by some, mourned by others, wrongly claimed by a few.

Initially published in 1996, John Ringo has been updated to a second edition with much new information researched and uncovered by David Johnson and other Ringo researchers.

“An absorbing, skillfully told narrative biography that effectively transports the reader to a rugged and lawless century past.” —Midwest Book Review

“This is the definitive biography of John Ringo, sans mythology and malarkey.” —Bob Alexander, award-winning author of Old West history

“Historian Dave Johnson sets aside the legends and myths to present here the most complete biography of Ringo to date, from his participation in the Mason County ‘Hoo Doo’ War of Texas to the violence and feuding with the Earps in Tombstone, ‘The Town Too Tough to Die.’” –—Chuck Parsons, author of John B. Armstrong, Texas Ranger and Pioneer Rancher

“A dogged researcher and rigorous historian, David Johnson sure-handedly brings to light new truths and lays to rest old falsehoods about this misunderstood gunman’s life and death.” —Scott Zesch, author of The Captured, winner of the TCU Texas Book Award

“David Johnson has unsnarled the tangled story of John Ringo, which unfortunately for too long has been the victim of myth and misstatement, almost from the moment of Ringo’s death. Johnson’s attention to detail and accurate documentation finally gives us the real story and the real man.” —Rick Miller, author of Sam Bass & Gang