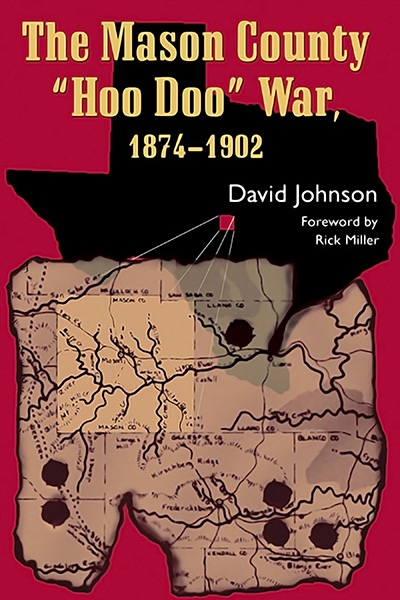 In 1874 the Hoo Doo War erupted in the Texas Hill Country of Mason County. The feud began with the rise of the mob under Sheriff John Clark, but it was not until the premeditated murder of rancher Timothy Williamson in 1875, a murder orchestrated by Sheriff Clark, that the violence escalated out of control. His death drew former Texas Ranger Scott Cooley to the region seeking justice, and when the courts failed, he began a vendetta to avenge his friend.

In the ensuing months, Sheriff Clark’s mob ambushed ranchers George Gladden and Moses Baird, which drew gunfighters such as John Ringo into the violence. Local and state officials proved powerless, and it was not until the early 1900s that the feud burned itself out.

David Johnson analyzes the myths and legends surrounding the feud and presents the first definitive account of what happened in Mason County—a case study in frontier violence of the bloodiest kind.

“A haunting story of ethnic strife, human frailty, betrayal, vengeance, and the harrowing repercussions of mob justice.” —Scott Zesch, author of The Captured

“This is a thoroughly researched study, with great work in primary source materials. Johnson reveals his deep understanding of the reasons for the feud’s beginning as well as its development and how it affected other people in the area.” —Chuck Parsons, editor, National Outlaw/Lawman History Association Quarterly

“As this fascinating and carefully researched book shows, two sides engaged in unmerciful mob violence against each other over matters that mainly involved cattle theft and revenge. A third side tried to end the deadly conflicts, yet some of its members also were outlaws who preyed on the warring factions. A few of the lawmen drawn into the conflict ended up corrupted and committing crimes, as well.” —Si Dunn, Dallas Morning News

“Few blood feuds in the West were more vicious or more lethal than the Mason County War of Texas… Depicting a formidable body count, along with episodes and motivations which are characteristic of other western feuds, David Johnson has placed the Mason County War in the front rank of extralegal frontier conflicts.” —Bill O’Neal, Journal of Arizona History