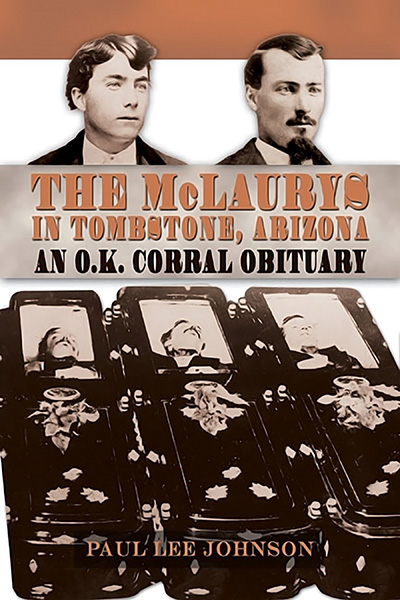 The McLaurys in Tombstone, Arizona: An O.K. Corral Obituary

About Johnson's The McLaurys in Tombstone, Arizona

On a chilly October afternoon in 1881, two brothers named Tom and Frank McLaury were gunned down on the streets of Tombstone, Arizona, by the Earp brothers and Doc Holliday. The deadly event became known as the gunfight at the O.K. Corral, and in a quirk of fate, the brothers’ names became well-known, but only as bad men and outlaws. Did they deserve that reputation?

The McLaurys in Tombstone, Arizona: An O.K. Corral Obituary explores this question, revealing details of their family background and the context of their lives on the frontier. Paul Lee Johnson begins their story with the McLaury brothers’ decision to go into the cattle business with an ambition to have their own ranch. When they moved to Arizona, they finally achieved that goal, but along the way they became enmeshed with the cross-border black market that was thriving there. As “honest ranchers” they were in business with both the criminal element as well as the legitimate businesses in Tombstone.

Law enforcement in Tombstone languished as a personal rivalry intensified between the sheriff’s office and the local federal Deputy Marshal (who also served as Chief of Police). In the year 1881, while Cochise County and Tombstone city governments tussled, the Territorial Governor abdicated his office, and the national government was paralyzed while the President of the United States lay bed-ridden from an assassin’s bullet.

Another principal in this story was an older brother, William, who set aside his law practice in Fort Worth to settle his brothers’ affairs, and associated himself with the prosecution of the Earp brothers and Doc Holliday. Privately, he was still grieving the death of his wife only weeks before. Despite his efforts, the Earps and Holliday were exonerated, and the “Gunfight at the O.K. Corral” became the opening salvo of a feud that took several more lives.

Johnson first viewed the letters of William R. McLaury when he was 14, and his life-long interest has resulted in the writing of this book. He has interviewed family descendants and mined their sources, government correspondence, and letters that have never before been published to reveal the human lives behind the storied events. For the first time the events of the O.K. Corral gunfight are presented from the viewpoint of the McLaurys, two brothers who lost their lives and reputations, and a family who tried in vain to find restitution.

“This important work provides new insight into the two brothers who died on that fateful day, and to the family that carried the scar. This book is essential for any student of Tombstone and the gunfight.” —Casey Tefertiller, author of Wyatt Earp: The Life behind the Legend

“A major benefit of this work is the inclusion of previously unpublished letters from within the McLaury family. For the first time we have an inner look at how the McLaurys viewed some of the significant events presented by Paul Lee Johnson.” —Roy B. Young, editor of the Wild West History Association Journal

PAUL LEE JOHNSON is the author of several articles on the famous gunfight in Tombstone, Arizona, and a featured speaker at the annual Tombstone Territory Rendezvous. He is director of the Nightwatch program at the Cathedral of St. John the Divine in New York City. He and his wife, Mary, have two grown children.

The McLaurys in Tombstone, Arizona: An O.K. Corral Obituary