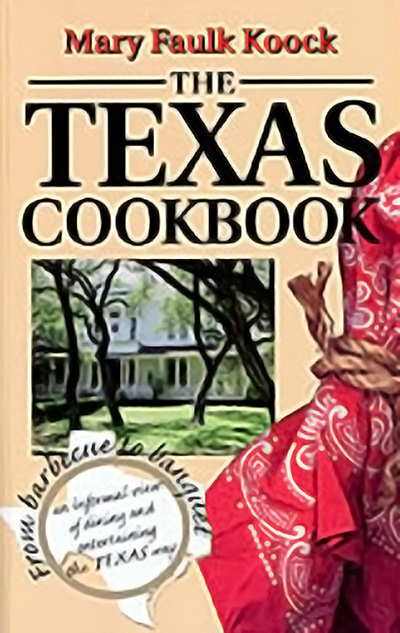 About Koock's The Texas Cookbook

This delightful collection captures the flavor and diversity of the cuisine of the Lone Star State. The Texas Cookbook presents recipes ranging from down-home cooking to high-class affairs, from regional favorites to ethnic specialties. Mary Faulk Koock traveled throughout Texas gathering recipes from ranch kitchens and city hostesses. Scattered among these are the author’s anecdotes from her vast and varied encounters with the famous and influential.

At the home of friends in Dallas Koock reveals the recipe for Chicken Cannelloni served after an opera. We share in her delight with Persimmon Salad in San Antonio, Cold Breast of Duck with Orange Slices in Houston, and Cebollas Rellenas from the Rio Grande Valley. Where else can you learn the story behind Slumgullion, a purported concoction of Fort Worth’s Amon Carter, Sr., and friend Will Rogers, or find the recipe for Pepparkakor (Swedish Ginger Cookies) from the Austin area? Other cities with recipes featured are Tyler, Abilene, Rockdale, El Paso, Waco, Columbus, and Corpus Christi. Much more than a cookbook, this collection offers a look at a way of life and entertaining, Texas style.

“Hooray! Mary Faulk Koock’s book is back by popular demand. Life will be more interesting with her stories and recipes.” —Liz Carpenter (former Press Secretary to Lady Bird Johnson)

”[A]s exuberant as the state, and full of amusing information and good recipes from every part of it… [G]reat fun for Texans and non-Texans alike.” —New York Times Book Review

“Here is a collection of recipes as varied and interesting as the state from which they come… Most recipes are given as part of a complete menu, and are clear and easy to follow.” —Library Journal

“Green Pastures is the Grande Dame of Austin restaurants.” —The Austin Chronicle

Hostess, businesswoman, art patron and supporter, Mary Faulk Koock has attracted people from all walks of life to her great style and love of life through over numerous printings of The Texas Cookbook. This remarkable woman transformed her family home into one of country’s most elegant restaurants, Green Pastures. She traveled widely and well, nurturing a community of artists, politicians, musicians and ranchers across the state. Her capacity to create experiences and build friendships with everyone whose path she crossed transformed dinners and receptions from the simple to the sumptuous.

The Texas Cookbook is a portrait of good food and good company. It goes beyond wonderful recipes and invites us to share the hospitality of leading Texans of the 1960s. Here is a Texas we’ll never know again, peopled by larger-than-life personalities and embellished with a lifestyle of grace and fun. Travel across the state and have breakfast with Van Cliburn, lunch at the world-famous King Ranch, the “eighth wonder of the world,” and dinner with Joan Sutherland and Dorothy and Richard Rogers. Join Mary Faulk Koock as she stages lunch for LBJ, Harry Truman, and Sam Rayburn and a post-concert dinner for pianist Leonard Pennario—and see if you don’t have more fun than Martha Stewart could ever imagine.

“When The Texas Cookbook was first published in 1965, I was a young working mother. Busy running my first household, I would frequently get calls from people who had questions about a recipe. They would be in the middle of preparing for a dinner party, puzzling over the recipe for Shrimp Acapulco or Maryalice Shiver’s menu for Dwight Eisenhower. Mostly though, I think they wanted to know how to emulate that great style Mother wove with such grace and panache.

Mother’s love affair with style didn’t start with her restaurant at Green Pastures, but it certainly found a stage there. Green Pastures, of course, is the old Faulk family home in South Austin, a big frame country house that housed seventeen friends and relatives when I was born, though I can remember wandering the halls and grounds and never seeing anyone. The Faulks gave it to Mother soon afterwards because she had the most children, and she opened the restaurant. I remember the excitement of having paying customers come to our house, a memory Mother describes in her first chapter, “People are here.”

The Texas Cookbook is a journey through her beloved state, starting in our home in Austin at Green Pastures and winding through the towns, cities and ranches that gave rise to the Texas myth. It is an introduction to her extended family, old friends and new ones she meets along the way.

We witness Houston restaurateur Camille Berman explain Texas ways as he prepares dinner for King Hussein. We hear about financier Amon Carter’s swapping hats with the likes of FDR and J. Edgar Hoover, and we peek over Mother’s shoulder as she juggles protocol and runaway horses at a reception for Konrad Adenauer at the LBJ Ranch.

Mother worked on the book with the great James Beard; their partnership, I think, a testimony to both her influence and that moment in history.

Indeed, the 1960s were an exciting time for Texas. A Texan was in the White House and suddenly the state was an epicenter of style. Trendsetters like Mother, Helen Corbitt, and Stanley Marcus were introducing a new kind of Texas hospitality, an elegant informality built around helping people have fun. Today, another Texan is in the White House and once again, people are interested in how our state does things.

I’m not sure how helpful I was to the people who called me with questions in 1965. I can say, however, that The Texas Cookbook continues to be a guide and a comfort to anyone who believes in a memorable good time. Over forty printings later, styles have changed but the basic rules still hold: to have a good time, take good company, add good food, and have fun. This holds true whether you’re hosting the president’s cabinet or the next-door neighbors.”

Actress, singer, businesswoman and avid supporter of the arts, Karen Kuykendall grew up in the Koock family home of Green Pastures in Austin, Texas. Her extended family included storytellers, artists, writers, actors, politicians and just plain characters. Karen has worked in musical and dramatic theater from Austin to Vermont, including an east coast tour of Neil Simon’s Brighton Beach Memoirs, and a mid-west tour of the musical Mame. She appeared with Ballet Austin singing Cole Porter in the premier of Kisses at Performance Hall. Ms. Kuykendall will appear in Big Love, this September. She has done radio and TV voice overs and received numerous awards.

From the pages of The Texas Cookbook :

Drop by teaspoonfuls on a cookie sheet, and cook at 325 degrees for 20 minutes or more.

Mix crumbled bread with milk, sugar, nutmeg, vanilla and eggs. Add raisins (which have been soaked in hot water). Place casserole in pan of hot water and bake at 325 degrees for approximately 30 minutes.

Cut the chicken into desired pieces and have thoroughly chilled before cooking. Salt and pepper each piece, then carefully roll in flour. Have the frying fat very hot and drop a few pieces into it at a time—do not cook too many pieces at a time. After each piece has been turned, lower the heat and cook until golden brown. Drain on brown paper. To make delicious creamed gravy, you drain off the surplus fat when the chicken is fried, leaving all the crumbs in the frying pan; these must not be burnt. Add a little flour and stir while browning, then add 1/4 cup of hot water and stir until smooth. As this is very thick, thin it to the desired thickness of gravy with milk or cream. Season to taste with salt and black pepper.

In a heavy skillet, brown chops lightly on each side. Place in a heavy baking pan and season with a little Lawry salt. Place thick-sliced Winesap apples around the edge of the pan and cover. Cook at 350 degrees for 30 minutes. Remove apple slices to a lightly buttered cookie sheet; brush with butter, sprinkle with brown sugar and return to the oven for about 5 minutes. To the chops add the wine and water and return them to the oven for about 5 minutes. Place chops on the center of a hot platter and arrange apple rings, slightly overlapping, around the chops. Cook down water and wine and drippings from the chops just a little and pour over chops. Sprinkle with chopped parsley.