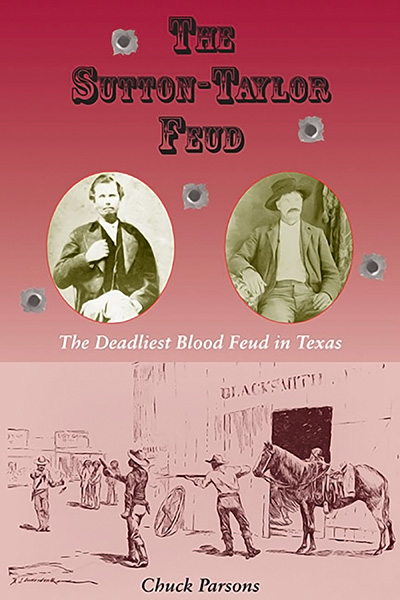 The Sutton-Taylor Feud: The Deadliest Blood Feud in Texas

About Parsons's The Sutton-Taylor Feud

New in Paperback: The Sutton-Taylor Feud in Texas began shortly after the Civil War ended and continued into the 1890s. William E. Sutton was the only Sutton involved, but he had many friends to wage warfare against the large Taylor family and their deadly supporter, John Wesley Hardin. Mobs formed in Comanche County in retaliation for John Wesley Hardin’s killing of a Brown County deputy sheriff. One mob “liberated” three prisoners from the DeWitt County jail, thoughtfully hanging them close to the cemetery for the convenience of their relatives. An ambush party killed James Cox, slashing his throat from ear to ear—as if the buckshot in him was not sufficient. A doctor and his son were called from their home and brutally shot down. Texas Rangers attempted to quell the violence, but when they were called away, the killing began again.

“Pistoleer John Wesley Hardin provided the star power for the fandango, but the horrific violence and terror engendered by the Suttons and Taylors gave the feud a near mythic status that lives even today.” —True West

“This is nothing less than the definitive study of this classic Texas feud, which spanned three decades and took eighty lives.” —Roundup Magazine

“The Suttons and Taylors were both victims and aggressors in a vicious cycle of violence and revenge… . Parsons no doubt tells a brilliant account of this historic, yet deadly time in Texas history.” —East Texas Historical Association Journal

“A fascinating, expertly researched chronicle of bloodshed on American soil long after the Civil War, The Sutton-Taylor Feud is a worthy addition to college library and Texas history shelves.” —Midwest Book Review

The Sutton-Taylor Feud: The Deadliest Blood Feud in Texas