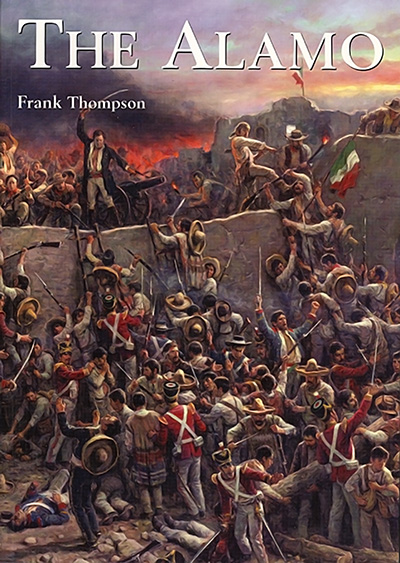 About Thompson's The Alamo

Millions of people each year visit the 4.2-acre complex known worldwide as “The Alamo.” According to Richard Bruce Winders, Historian and Curator at the Alamo, they come to see the old mission in San Antonio, Texas, where a small band of Texan revolutionaries and other heroes fought to the death, holding out for thirteen days against the Mexican army of General Antonio López de Santa Anna. Although the Alamo fell in the early morning hours of March 6, 1836, the death of the Alamo defenders has come to symbolize courage and sacrifice for the cause of liberty. The memories of Jim Bowie, Davy Crockett, and William B. Travis are as powerful today as when the Texan Army under Sam Houston shouted “Remember the Alamo!” less than two months later when it routed Santa Anna at the Battle of San Jacinto.

This book is more than a fabulous tribute to those heroic few who fell defending the mission, ultimately buying time for Houston to consolidate his forces. It is a thoroughly researched, vividly illustrated, objective description of the circumstances building up to and leading from that vital stand. Author Frank Thompson describes the political and military organization of both sides in the conflict, the weapons and equipment available to them, and the enduringly famous personalities involved. He reveals contemporary writings and reported views of those whose help was repeatedly begged for, and also of those who wanted desperately to help but arrived too late to relieve the Alamo.

Narrating the dramatic battle in fascinating detail, Thompson builds an accurate picture of one of the greatest periods in American history. He also explores how the Alamo has been viewed by historians and by those in the entertainment industry, searching diligently for the truth and highlighting bias and mythology. Complementing the narrative are more than one hundred superb illustrations, many in full color, including maps, contemporary paintings, and specially commissioned color photographs of artifacts.

“For readers who seek information concerning the Alamo battle and its place in the national psyche, The Alamo constitutes one-stop shopping. Many of its illustrations are extremely rare and some have never appeared in public prior to their appearance in Thompson’s book.” —Stephen L. Hardin, author of The Alamo 1836 and Texian Iliad: A Military History of the Texas Revolution

The most dramatic story in Texas history, with more than seventy full color illustrations.

FRANK THOMPSON is an author, filmmaker, and film historian with a lifelong interest in the Alamo. Among his twenty books are The Alamo: A Cultural History, Alamo Movies, and The Alamo: The Illustrated Story of the Epic Film. He has also written numerous articles on the Alamo for publications ranging from Texas Monthly to The Philadelphia Inquirer. As an Alamo authority, Thompson has appeared in the History Channel’s television documentaries “The Alamo” and “History vs. Hollywood: The Alamo,” and has produced five video releases on the Alamo. He lives in North Hollywood, California.