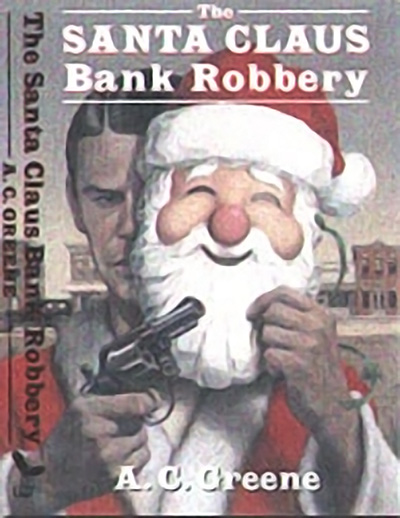 A chronicle at once grim and hilarious… a choice bit for collectors of Americana.” —Book-of-the-Month-Club News

“His story is chilling.” —Atlantic Monthly

“What truly distinguishes the book is Mr. Greene’s feeling for that distant, almost 19th century time… of that vanishing, hell-fire, Church of Christ, still faintly frontier place.” —The New Yorker

Master storyteller A. C. Greene re-creates one of America’s most bizarre holdups—one that began as a lark. On Christmas Eve 1927, four men set off to rob the First National Bank of Cisco, Texas. Soon the lark turned into a tragedy—and at times a comedy—of errors. The robbers did not realize the car they had stolen for their getaway was running on empty. The leader did not anticipate the attention his disguise would draw, even though it was a bright red Santa Claus suit. And they could not have known that all of Cisco would have guns at hand because the Bankers Association had offered a reward of $5,000 for any dead bank robber, no questions asked. The Santa Claus bank robbery set off a chain of events that would lead to violence and the death of six men and launch the largest manhunt Texas had ever seen.

A. C. Greene’s factual account of the unusual crime reads like a novel—fast paced, full of unexpected turns, and rich with the flavor of life in Texas at the beginning of the end of the Old West. This new edition contains an Afterword with photographs, some of them never before published, and followup information on the lives of the participants, including the surviving robber, witnesses, and kidnap victims.

“The men were looking for an opportunity to improve their lot, and they had decided it was an opportunity they would have to make for themselves. They were driving south, this December midnight, from Wichita Falls, Texas, toward the smaller Texas town of Cisco, where they believed an opportunity existed. Cisco was on the edge of the fabled Ranger oil field which had opened up that part of the world to its superabundant mineral wealth. At the top of the boom, thousands and thousands of men came rushing in to seek a fortune, and a good many of them succeeded. Now, although the boom days were over, it was still a fair territory.

But the men in the car were not headed for Cisco to challenge mother earth and the odds of the oil business. They were going there for a very special kind of employment, a get-rich-quick job with easy hours, high risks, and big returns.

They were going there to rob a bank.” —from The Santa Claus Bank Robbery