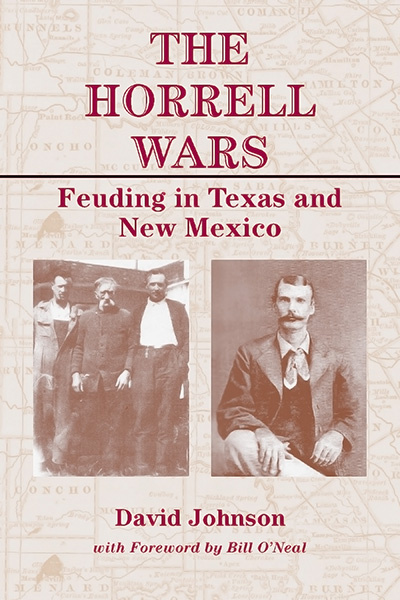 The Horrell Wars: Feuding in Texas and New Mexico

About Johnson's The Horrell Wars

For decades the Horrell brothers of Lampasas, Texas, have been portrayed as ruthless killers and outlaws, but author David Johnson paints a different picture of these controversial men. The Horrells were ranchers, but some thought that they built their herds by rustling. Their initial confrontation with the State Police at Lampasas in 1873 marked the most disastrous shootout in Reconstruction history. The brothers and loyal friends then fled to New Mexico, where they became entangled in what would later evolve into the violent Lincoln County War. The brothers returned to Texas, where in time they became involved in the Horrell-Higgins War. The family was nearly wiped out following the feud when two of the brothers were killed by a mob. Only one member of the family, Sam, Jr., lived to old age and died of natural causes.

“Dave Johnson has given us the complete story of the Horrells, a fascinating and accurate history told in a fast paced style.” —Chuck Parsons, author of The Sutton-Taylor Feud and co-author of A Lawless Breed

The Horrell Wars: Feuding in Texas and New Mexico