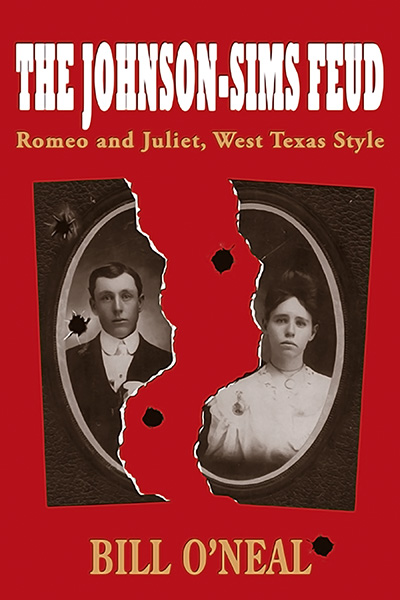 About O'Neal's The Johnson-Sims Feud

The Johnson and Sims families were pioneer ranchers, settling in the same region—Lampasas and Burnet counties—in the dangerous years just before the Civil War. After the war two couples from the next generation, Billy and Nannie Johnson and Dave and Laura Belle Sims, established large ranches—forty or more sections each—in adjoining counties, Scurry and Kent, in West Texas.

Just after the turn of the century, the two families united in a marriage of fourteen-year-old Gladys Johnson to twenty-one-year-old Ed Sims. Billy Johnson set up Gladys and Ed on a ranch, and the young couple had two daughters, Helen and Beverly. But Gladys was headstrong and willful, and Ed drank too much, and both sought affection outside their marriage. A nasty divorce ensued, featuring a gun-wielding Gladys prior to court proceedings. Gladys moved with her girls to her father’s luxurious ranch house, where she soon fell in love with famed Texas Ranger Frank Hamer.

Ed’s custody rights proved troublesome. When Ed tried to take his daughters for a prearranged Christmas visit in 1916, Gladys shot him twice on the Snyder square teeming with shoppers. The wounds were not fatal, but one of Gladys’s brothers, Sid, bolted out of their father’s bank and finished off Ed with a shotgun blast.

One of the best lawyers in West Texas, Judge Cullen Higgins (son of the old feudist Pink Higgins) managed to win acquittal for both Gladys and Sid. In the tradition of Texas feudists since the 1840s, the Sims family sought revenge. A former sheriff and Sims’ son-in-law, Gee McMeans, led an attack in Sweetwater and shot Billy Johnson’s bodyguard, Frank Hamer, twice, while Gladys—by now Mrs. Hamer—fired at another assassin. Hamer shot back, killed McMeans, and was no-billed on the spot by a grand jury watching the shootout through a window. An attempt against Billy Johnson failed, but a three-man team shotgunned the widely respected Cullen Higgins. Texas Rangers and other lawmen caught one of the assassins, extracted a confession, and then prompted his “suicide” in a Sweetwater jail cell.

Bill O’Neal first wrote about the Johnson-Sims Feud in the closing chapters of his biography of Pink Higgins. Although assuming—incorrectly—that he had exhausted the subject, O’Neal soon began to receive fresh information from descendants of the feudists. Interviews with first- and second-generation descendants produced a wealth of new materials. A meeting with nonagenarian Beverly Sims Benson, who was present when her father was slain and who knew all of the principals, made it clear that the conflict cried out to be fully explored- the story of the last traditional family feud in Texas.

“Bill O’Neal, prolific author and historian, has added to his long list of well-researched and informative books a new account of a little-known feud bitterly fought in West Texas during the early years of the twentieth century. Texans and others interested in the rich history of Texas will find it fascinating reading.” —Robert K. DeArment, author of Bat Masterson and editor of Life of the Marlows

“Raw and brutal, the Johnson-Sims feud is captured for the first time by an author who truly portrays the savage emotions, naked hatred, and stark realities of the feud. This is a gripping tale well told by a skillful historian.” —David Johnson, author of John Ringo and The Mason County “Hoo Doo” War

“Literature relating to feuds in Texas during the twentieth century is extremely scarce, so this work will be of great significance. Since much of the material relates to families associated with the development of the ranching industry of West Texas, the book has much to contribute to that field of interest.” —Donaly Brice, Texas State Archives

“The author reconstructs the homicide, the events leading to it and its aftermath, in considerable detail, largely through extensive interviews with family members from both sides.” —Journal of the West

”[O’Neal’s] meticulous research adds depth to the history of the people and places of West Texas. His descriptions are aided by the extensive illustrations included in the book… . Overall, the work provides both a readable guide to anyone interested in the lives of early West Texas cattle ranchers and an absorbing tale of passion, violence, and retribution.” —Southwestern Historical Quarterly